Okay...i was trying to decide how to update this blog about the progress of my sims at the Great Canadian Grid....wayyy to much to upload and talk about ...so instead I made a video summarizing 8 months of work ( from scratch!) in less than 4 minutes...here it is :D

And after clearing cache...building went on.... 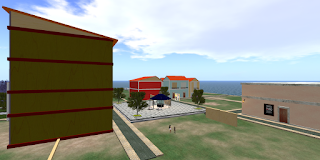 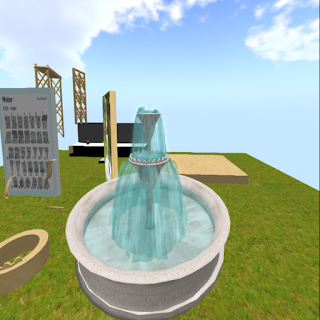 After planning the basic layout of the mini version of Lisbon, then come the details and the texturing. For a while, oddly tinted buildings and bare prim slabs filled the sim. Texturing and details like fountains followed...oh! and trees!
Posted by Stormy at 10:18 PM No comments: 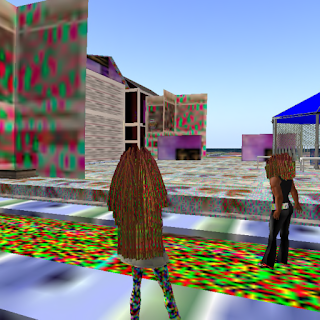 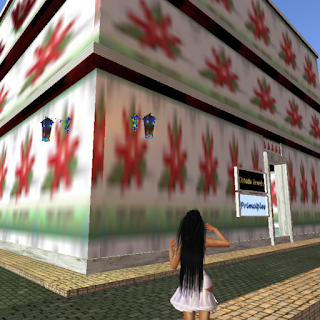 One day I came online and I found my ALL the textures in my region changed to rainbows, flowers and all kinds of textures...all kinds except those I had intended to use. I panicked and called a friend, but he saw everything normal...so the next panic stage came with the question in my head of whether I had fried my graphic card?!
Ahhh panic not! - said another friend. Just clear your cache and relog. And so I did...and that gigantic flower building (first photo became normal again with ocre stucco and plaster borders!! 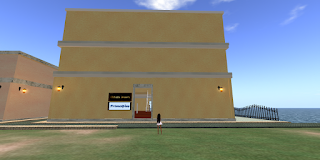 What a relief to see everything come back to its normal (yet unfinished) self!! Wheww!!!
Posted by Stormy at 2:56 AM No comments:

Examining plans, re-examining them...scratching them out and starting over. 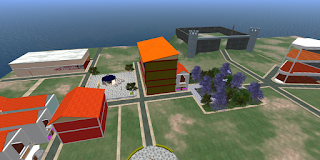 It comes to a point where you start putting 'dummies' of the buildings that you want in your sim, just to have an idea of how it's going to be organize and you realize even one basic region (15,000 prims and over 64K square meters of virtual land) is a gigantic project.
I scratched my plans 2 times....here's the second plan that had to be tossed only to start over lol.....
I am in love with a red building (I think it's in Bairro Alto) but....1 red building can break the 'mood' if you want to capture the mostly-pastel, mostly-white and yellow atmosphere of Lisbon. The red roofs are a must, but how to place them on a flat surface when Lisbon is built over 7 hills?

Also...no light posts...how can i capture the golden light of Lisbon nights?

This is when i realized the task of terraforming, stone stairs as roads and lighting had to be more noticeable if i was going to capture the 'flavor' of Lisbon.

Wish I could do a replica but I'm doing this on my own time and money, so that's out of the question...I'll have to capture the spirit!! :)

Posted by Stormy at 2:50 AM No comments: 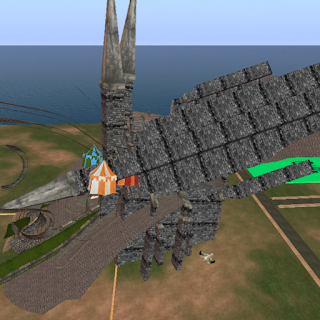 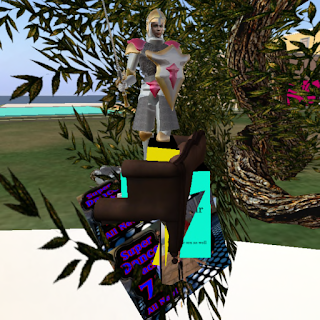 So yes, I did built a lot of the things in the region, but I also went shopping in the hypergrid...and here I am posing by (or buried within lol) piles of trees, statues, buildings and other things from the hypergrid.

Posted by Stormy at 2:44 AM No comments:

Every road needs a destination 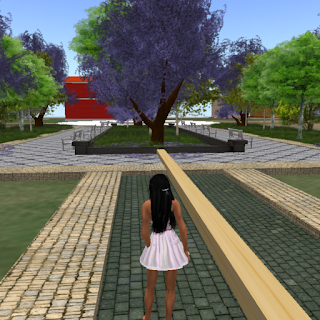 Ahh yes...the road leads to a park!  Benches, jacarandas - with their gorgeous blue flowers - and more trees...and plenty of sunlight like in a great Lisbon spring day. Some things I built, some I gathered from all over the hypergrid :D

Still....at this point the sim is getting the ingredients for a Lisbon atmosphere, but it's a long way to go!
Posted by Stormy at 2:40 AM No comments: 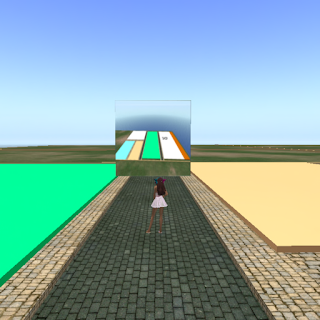 Having found the center of the sim...and planned the first 1/8 of it...I made some roads with prims and textures. The first roads are laid...it still doesn't make sense, because I only have prims where things "will be" but they only exist in my head.
Cobblestones and portuguese rock sidewalk textures, all brushed up in GIMP,  were perfect for the narrow roads where only people can walk...like in Baixa, where there's very few roads where car traffic is allowed. :)
Posted by Stormy at 5:47 AM No comments: