Naming your sim and finding your way around it. 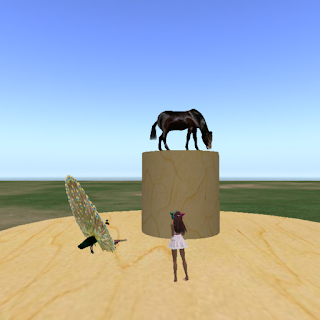 When you order your sim, you have to give it a name. I named mine Lisboa I. And as you saw in an earlier post, I started to draw a plan from a corner but eventually I realized I didn't really have an idea of its dimensions: I knew the numbers, but not really what to do with so much space and so many prims...so I found the very center marked it visually with two 256 long prims crossing at the very center. Then I placed a pedestal there for a Lusitano horse (garanhao! LOL), the horse of Portugal. It was then when I knew where I was...sort of!

The peacocks and the horse were gifts from people that already were in the Great Canadian Grid when I arrived....I believe it was Bonnie who gave it to me. Jayde took me on a trip to the hypergrid omgggg that was crazy how much i got there!

Allure gave me the first tour in the hypergrid. It was surreal to go form world to world seeing the creations of so many people all over the world!

Then came Jayde and gave me another tour specifically looking for building parts...and she helped me get my own portal to the hypergrid...which i eventually rezzed at the sim :)

The kindness and sweetness of the arrival is unforgettable, but there were so many nice people it's hard to tell which one did what for me, You go through a period of fog after getting the magical but gigantic task of building a sim, but eventually...after the fog clears... you get in the same mood and start helping the newcomers.

Two of my SL friends also came to the Great Canadian Grid: Beliria and Beldara. They're hoping to set up shop there and each has their own sim (or sims!). Other friends followed, like Andy. Xzavia was already there with her mountain of textures!! Hehe.

Anyway...those were the very early days in late April 2015. At that time there were about 20 prims in my huge sim..and I still didn't have the second one.....